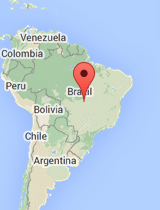 Brazil is a developing nation classified as upper middle income. Located in eastern South America (north of Paraguay and south of Venezuela), the climate is extremely diverse with classifications that range from humid temperate (no dry season) to humid equatorial (no dry season).

Vaccination is usually recommended if you’ll be traveling in areas where there is risk of yellow fever transmission.

Depending on your itinerary, your personal risk factors, and the length of your visit, your health care provider may offer you vaccination against hepatitis A, hepatitis B, influenza, measles, mumps, rubella, meningococcal meningitis, rabies, or typhoid fever. Routine immunizations, such as those that prevent tetanus/diphtheria or "childhood" diseases, should be reviewed and updated as needed.

(2020) Malaria risk due to P. vivax (84.3%), P. falciparum (15.7%) and mixed infections (0.5%) exists in most forested areas below 900 m within the nine states of the Amazon region (Acre, Amapá, Amazonas, Maranhão, Mato Grosso [northern part], Pará [except Belém City], Rondônia, Roraima and Tocantins [western part]). Transmission intensity varies from one municipality to another and is higher in jungle-mining areas, in agricultural settlements, in indigenous areas, and in some peripheral urban areas of Cruzeiro do Sul, Manaus, and Pôrto Velho. Malaria also occurs on the periphery of large cities such as Boa Vista, Macapá, and Rio Branco. In the states outside the administrative region of Amazonas, the risk of malaria transmission is negligible or non-existent, but there is a residual risk of P. vivax transmission in Atlantic forest areas of the states of São Paulo, Minas Gerais, Rio de Janeiro and Espirito Santo. Detailed information on the epidemiological situation of malaria in Brazil is available at https://www.gov.br/saude/pt-br/assuntos/saude-de-a-a-z-1/m/malaria.

High risk of violent crime (armed robbery, home invasion, sexual assault, carjacking, and murder) and high risk of petty crime exist in Rio de Janeiro (including Corcovado Mountain hiking trails), São Paulo, Recife, Salvador, and other cities throughout the country; on beaches; on or near public transportation; and during large-scale events such as Carnival, sporting events, and international conferences.

Express kidnappings to force cash withdrawals at ATMs may occur in cities throughout the country.

Protests and demonstrations frequently occur throughout the country, especially in São Paulo, and have the potential to turn violent without warning. Bystanders are at risk of harm from violence or from the response by authorities. Disruption to transportation, free movement, or the ability to carry out daily activities may occur.

A dangerous security environment may exist in favelas and in areas bordering other countries. Piracy (involving commercial and private leisure vessels) may occur in coastal waters, especially off of the northeastern coast.

Wildfires occur during the dry season from May through September in central areas, including Brasília.

Selected Embassies or Consulates in Brazil