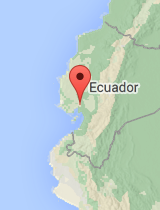 An official yellow fever vaccination certificate may be required depending on your itinerary. Vaccination is usually recommended if you’ll be traveling in areas where there is risk of yellow fever transmission.

Depending on your itinerary, your personal risk factors, and the length of your visit, your health care provider may offer you vaccination against hepatitis A, hepatitis B, influenza, measles, mumps, rubella, rabies, or typhoid fever. Routine immunizations, such as those that prevent tetanus/diphtheria or "childhood" diseases, should be reviewed and updated as needed.

High risk exists throughout the country, with moderate risk in deluxe accommodations. Food and beverage precautions may reduce the likelihood of illness.

Due to civil unrest and other ongoing security concerns, US (DOS) advises avoiding travel to northern areas of Esmeraldas Province (including the city of Esmeraldas) and to Carchi and Sucumbíos provinces. UK (FCO), Canada (GAC), and Australia (DFAT) have more limited warnings.

No intrinsic risk of attack by terrorist groups exists, but unforeseen attacks are possible.

High risk of violent crime (armed robbery and sexual assault) and high risk of petty crime exist throughout the country, especially in Quito (particularly in El Panecillo, El Ejido, and La Carolina parks and the districts of La Mariscal, La Floresta, La Marin, Guápulo, South Quito, and Old Town Quito); in Guayaquil (in the districts of Urdesa, Kennedy, Alborada, and Malecón Simón Bolívar [including Cerro Santa Ana]; near the bus terminal, the downtown and market areas, and the Sagrado Corazón de Jesús [statue of Jesus Christ] on Cerro del Carmen); in other cities (Cuenca, Manta, and Riobamba); on volcano hiking trails (including Cerro Mandango near Vilcabamba, Loja Province, the Pichincha volcano, and the volcano outside the limits of the Quito TelefériQo or its pathway); in Montañita (Santa Elena Province); on beaches in the province of Esmeraldas; in jungle lodges in the Lower Rio Napo and Cuyabeno Wildlife Reserve.

Theft of valuables from unattended accommodations is common.

Kidnappings by criminal groups occur in northern and northeastern areas bordering Colombia and Peru, including the Cuyabeno Wildlife Reserve. Targets may include foreigners (especially Westerners), including foreigners working for oil companies.

Express kidnappings to force cash withdrawals at ATMs occur throughout the country, especially in Quito and Guayaquil.

Protests and demonstrations occur throughout the country and have the potential to turn violent without warning. Bystanders are at risk of harm from violence or from the response by authorities. Disruption to transportation, free movement, or the ability to carry out daily activities may occur.

Passenger boats may be unsafe on the Galápagos Islands. Decline water transportation in vessels that appear overloaded or lack personal flotation devices or life jackets.

Basic safety standards for adventure activities (including bungee jumping, canopy tours, and recreational off-roading) may not be in place. Travelers should only use reputable adventure-sport operators for activities and equipment rentals.

The rainy season is from May through November in areas east of the Andes mountains and December through May in coastal areas. Floods, mudslides, and landslides may occur.

Selected Embassies or Consulates in Ecuador