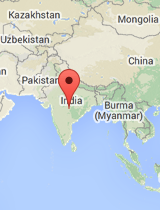 India is a developing nation classified as lower middle income. Located in southern Asia (between the Arabian Sea and the Bay of Bengal), the climate is extremely diverse with classifications that range from humid equatorial (no dry season) to subtropical dry winter.

Although yellow fever does not occur in India, an official yellow fever vaccination certificate may be required depending on your itinerary.

Depending on your itinerary, your personal risk factors, and the length of your visit, your health care provider may offer you vaccination against cholera, hepatitis A, hepatitis B, influenza, Japanese encephalitis, measles, mumps, rubella, rabies, typhoid fever, or a one time polio booster if you haven't previously received one for travel. Routine immunizations, such as those that prevent tetanus/diphtheria or "childhood" diseases, should be reviewed and updated as needed.

(2019) Malaria risk due to P. falciparum and P. vivax exists throughout the year in the entire country below 2000 m. The majority of malaria in India is reported from the eastern and central parts of the country and from states which have large forest, hilly and tribal areas. These states include Odisha, Chhattisgarh, Jharkhand, Madhya Pradesh, Maharashtra and some north-eastern states such as Tripura, Meghalaya and Mizoram. There is no transmission in parts of the states of Himachal Pradesh, Jammu and Kashmir, and Sikkim.

Areas with malaria: All areas throughout the country, including cities of Bombay (Mumbai) and Delhi, except none in areas >2,000 m (6,562 ft) in Himachal Pradesh, Jammu and Kashmir, and Sikkim (see Map 2-15).

High risk exists throughout the country, including in deluxe accommodations. Food and beverage precautions may reduce the likelihood of illness.

Precautions to prevent brucellosis, seafood poisoning may be needed.

Due to terrorism, civil unrest, and other ongoing security concerns, Canada (GAC) advises avoiding travel to Jammu and Kashmir State (except the Ladakh area via the town of Manali or by air to the city of Leh); areas bordering Bangladesh and Burma in the states of Arunachal Pradesh, Assam, Manipur, Meghalaya, Mizoram, and Nagaland; and areas bordering Pakistan in the states of Gujarat, Rajasthan, and Punjab (except the Wagah border crossing). Canada also advises reconsidering travel (or avoiding nonessential travel) to the rest of Arunachal Pradesh, Assam, Manipur, Meghalaya, Mizoram, and Nagaland states. US (DOS), UK (FCO), and Australia (DFAT) have more limited warnings.

High risk of attack by domestic and transnational terrorist groups exists throughout the country. Targets may include domestic and international organizations and businesses; public places and events, including those frequented by tourists; and transportation systems.

High risk of kidnapping by terrorist groups exists in rural areas throughout the country. Targets may include foreigners (especially Westerners).

Moderate risk of sexual assault, including verbal and physical harassment, exists throughout the country, especially in New Delhi (particularly in Vasant Kunj area), Bangalore, and other cities; in Bodh Gaya; in Goa and Rajasthan states; in other areas frequented by tourists.

Scams involving gems and precious metals and false identity (such as criminals posing as tour guides) have been reported.

Protests and demonstrations frequently occur throughout the country and have the potential to turn violent without warning. Bystanders are at risk of harm from violence or from the response by authorities. Disruption to transportation, free movement, or the ability to carry out daily activities may occur.

Hazardous water conditions (including currents, tides, and undertows) may occur, especially at beaches in Mumbai and the Bay of Bengal. Heed posted warnings, and avoid beaches that are not patrolled. Do not swim alone or after dark, and do not walk on any beach after dark.

Passenger boats may be unsafe, including ferries and small crafts. Decline water transportation in vessels that appear overloaded or lack personal flotation devices or life jackets.

Risk exists for fatal wildlife attacks on safaris and in game parks and reserves. Travelers should closely follow park regulations, always maintain a safe distance from wildlife, and should not exit vehicles or protected enclosures.

Selected Embassies or Consulates in India