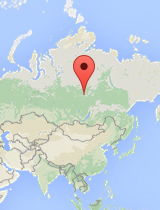 Russia is a developing nation classified as upper middle income. Located in northern Asia (along the Arctic and the North Pacific Oceans), the climate classifications range from humid cold (no dry season) to cold polar (tundra and ice), with cooler temperatures in some high-altitude areas.

Depending on your itinerary, your personal risk factors, and the length of your visit, your health care provider may offer you vaccination against hepatitis A, hepatitis B, influenza, Japanese encephalitis, measles, mumps, rubella, rabies, or tick-borne encephalitis. Routine immunizations, such as those that prevent tetanus/diphtheria or "childhood" diseases, should be reviewed and updated as needed.

(2016) Very limited Malaria risk due exclusively to P. vivax may exist in areas under the influence of intense migration from southern countries of the Commonwealth of Independent States.

Areas with malaria: None.
Drug resistance: Not applicable.

Moderate risk exists throughout the country, with minimal risk in deluxe accommodations. Food and beverage precautions may reduce the likelihood of illness.

Due to terrorism, harassment by government officials, and other ongoing security concerns, US (DOS) advises avoiding all travel to this country. UK (FCO), Canada (GAC), and Australia (DFAT) have more limited warnings.

Risk of attack by domestic and/or transnational terrorist groups exists throughout the country, especially in Moscow and St. Petersburg. Targets may include domestic and international organizations and businesses; public places and events, including those frequented by tourists; and transportation systems.

Moderate risk of violent crime (armed robbery and assault) and high risk of petty crime exist in Moscow and St. Petersburg and other cities, on or near public transportation, and in areas frequented by tourists (including Red Square and Izmailovsky Market).

Theft of valuables from unattended vehicles and accommodations is common.

Scams involving corrupt officials and false identity (such as criminals posing as police officers) have been reported.

Protests and demonstrations occur throughout the country and have the potential to turn violent without warning. Bystanders are at risk of harm from violence or from the response by authorities. Disruption to transportation, free movement, or the ability to carry out daily activities may occur.

A dangerous security environment exists in Chechnya, Dagestan, and Ingushetiya republics; in Stavropol Krai; and in Kabardino-Balkariya, Karachayevo-Cherkesiya, and North Ossetia republics.

Rent water sports equipment from reputable operators. Scuba dive only with personnel certified by PADI or NAUI and use equipment only from PADI- or NAUI-certified dive operators.

Extreme cold (which can lead to cold-related injury) occurs in northern areas.

Selected Embassies or Consulates in Russia

HIV testing is required to obtain a work or residence visa. Travelers, including short-term travelers, may be detained or deported after arrival if found to be positive for HIV or hepatitis.