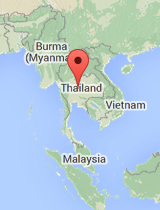 The health risk information presented here is summarized from Shoreland Travax®, a decision-support tool used by health care providers to perform a detailed health risk analysis based on specific locations, individual travel styles, and traveler risk behaviors. Travax provides practitioners current, independently researched malaria risk and prevention recommendations in a map-based format that goes beyond the annual WHO and CDC statements included here. Not included here are current reports from Travax of disease outbreaks or environmental events that may pose elevated risks to travelers’ health and safety. The Providers section of this site offers a directory of health care providers who utilize Shoreland Travax for travel health counseling. Learn more about the detailed reports and maps available from these practitioners (includes links to samples).

Thailand is a developing nation classified as upper middle income. Located in Southeast Asia (south of Laos and north of Cambodia), the climate is extremely diverse with classifications that range from humid equatorial (no dry season) to subtropical dry winter.

Although yellow fever does not occur in Thailand, an official yellow fever vaccination certificate may be required depending on your itinerary.

Depending on your itinerary, your personal risk factors, and the length of your visit, your health care provider may offer you vaccination against hepatitis A, hepatitis B, influenza, Japanese encephalitis, measles, mumps, rubella, rabies, or typhoid fever. Routine immunizations, such as those that prevent tetanus/diphtheria or "childhood" diseases, should be reviewed and updated as needed.

The following is current information as reported by the World Health Organization (WHO) and the U.S. Centers for Disease Control (CDC):

Precautions to prevent seafood poisoning may be needed.

The material below includes information from the U.S. Department of State (DOS), U.K. Foreign & Commonwealth Office (FCO), Global Affairs Canada (GAC), and Australia's Department of Foreign Affairs and Trade (DFAT), as well as from additional open-source material. Standard safety precautions that apply to all international travel can be found in the Library article Safety and Security.

Due to ongoing violence, Canada (GAC) and Australia (DFAT) advise avoiding travel to the provinces of Yala, Pattani, Narathiwat, and Songkhla. U.S. (DOS) and U.K. (FCO) have more limited warnings.

Risk of attack by domestic terrorist groups exists in the southern provinces of Yala, Pattani, Narathiwat, and Songkhla. Risk of attack by transnational terrorist groups exists throughout the country, including Bangkok and Phuket. Targets may include domestic and international organizations and businesses; public places and events, including those frequented by tourists; and transportation systems.

Moderate risk of violent crime (sexual assault, assault, and murder) exists throughout the country, especially in Bangkok (particularly on Khaosan Road and in nightlife districts), Chiang Mai, Pattaya, in resorts in southern areas (including Phuket), and during beach parties (including Full Moon parties).

High risk of petty crime exists throughout the country, especially in Bangkok (particularly in Chatuchak Weekend Market and on Khaosan Road) and in areas frequented by foreigners.

Theft of valuables from accommodations is common.

Protests and demonstrations occur throughout the country, especially in Bangkok and other major cities, and have the potential to turn violent without warning. Bystanders are at risk of harm from violence or from the response by authorities.

A dangerous security environment exists in the southern provinces of Yala, Pattani, and Songkhla.

Hazardous water conditions (including currents, tides, and undertows) may occur, especially in Phuket, Pattaya, and Koh Samui. Heed posted warnings, and avoid beaches that are not patrolled. Do not swim alone or after dark and do not walk on any beach after dark.

Passenger boats may be unsafe, including ferries and speedboats. Decline water transportation in vessels that appear overloaded or lack personal flotation devices or life jackets.

Basic safety standards for recreational water activities (including scuba diving, snorkeling, and jet-skiing) may not be in place. Rent water sports equipment from reputable operators. Scuba dive only with personnel certified by PADI or NAUI, and use equipment only from PADI- or NAUI-certified dive operators.

Basic safety standards for adventure activities (including bungee jumping) are often not in place. Travelers should only use reputable adventure-sport operators for activities and equipment rentals.

Risk exists for fatal wildlife attacks exists on elephant treks and in elephant and tiger sanctuaries. Travelers should only use reputable sanctuaries and tour operators for wildlife excursions.

Significant risk of traffic-related injury or death exists. The road traffic death rate is more than 24 per 100,000 population, the highest risk category. Carefully assess the safety of transportation options before any road travel.

U.S. Federal Aviation Administration has determined that the civil aviation authority of this country does not oversee its air carriers in accordance with minimum international safety standards.

The monsoon season is from November through March on Koh Sumai Island and southeastern areas of the Malay Peninsula and from May through October throughout the rest of the country. Floods, mudslides, and landslides may occur.

Selected Embassies or Consulates in Thailand